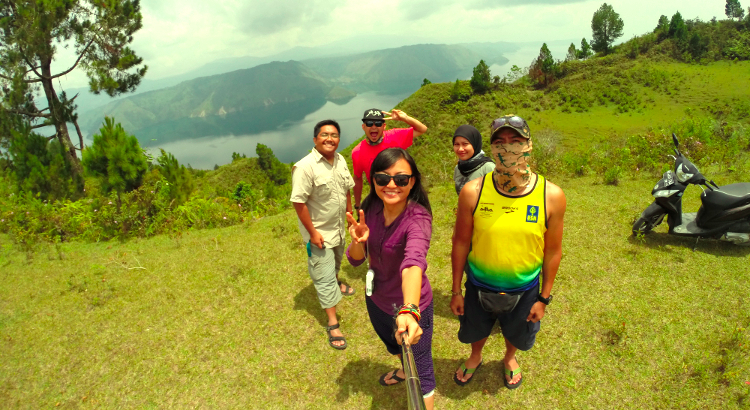 This is a story about 5 guys (read: persons) who went to Lake Toba, North Sumatra, Indonesia, on 16-19 October of 2014. This would be my first (or maybe second) real blog entry about travel, in which, this might ended up sounded like a technical documentation, wiki page or worst like a log file. It all started when Zue stumbled upon a cheap deal AirAsia ticket on early August 2014, and then we all decided “well what the heck”,  so we bought that return ticket to Medan (Kuala Namu International Airport, KNO) for MYR 164.80 per head (inclusive of KLIA2 fees, airport tax, fuel surcharge, AirAsia flight insurance and direct debit processing fee); which was a freaking good deal. After 2 months of studying routes, accommodations, point-of-interest and foods, we gambled our wit & wisdom and millions of IDR; here goes.

Introduction
Lake Toba is a lake and super-volcano. The lake is 100 km long, 30 km wide, and up to 505 meters (1,666 ft) deep. Located in the middle of the northern part of the Indonesian island of Sumatra with a surface elevation of about 900 metres (2,953 ft), the lake stretches from 2.88°N 98.52°E to 2.35°N 99.1°E. It is the largest lake in Indonesia and the largest volcanic lake in the world. (Thanks http://en.wikipedia.org/wiki/Lake_Toba). So, the plan was to go to all the awesome viewpoints there, while on-the-way from Medan to Lake Toba, and back from Lake Toba to Medan. The journey from Medan to Lake Toba only takes about 160 km, but due to road conditions, it took about 6 hours. Seriously, if the road quality is as good as the PLUS Highway, we might even go there on monthly basis. We covered most of the best parts of Lake Toba in 4 days 3 nights, 1 night spent in Samosir Island, and 2 nights spent in Berastagi.

[I will put the map of route from Medan to Lake Toba here.]

Day 1, Thursday, 16-Oct-2014
The adventure started even hours from 16-Oct-2014. Zue had problem checking-in via the web check-in. The web check-in keep on showing blank confirmation screens when completing the web check-in. Then I helped by doing it online at home on my PC. Nope, AirAsia Web Check-In decided to give his middle finger (read: the blank screen too), plus a time-out response. WTF? After a 3 retries, then I only managed to perform the freaking web check-in, for both at KUL and KNO, and that’s already at 12.10AM, and we need to be at the airport at least 1 hour before the flight, around 6.30AM. Then it hit me that my printer’s ink was out. One after another. I save the boarding slip into USB drive, and head to the nearest cyber cafe. In the cyber cafe, after hitting “print”, only 1 page get printed. Sigh. Turn out that it was an old printer problem because of memory queue flooding. So, all that took an hour plus for me, because I ended up fixing the printer. Back at home around 2.00AM.

Aumi and I finally arrived at KLIA2 around 5.30AM. We took a cab at 4.30AM, booked on 12.00AM using MyTeksi, and as usual, praises and complaints about the MyTeksi app by the cab driver all the way from Kelana Jaya to KLIA2. We head to the KFC as rendezvous point, while waiting for Ayeip, Zue and Jimmy. Ayeip spent the night there on the floor of KLIA2 with the other Caucasian backpackers, so, while eating my breakfast at 6.00AM, he appeared out of nowhere. Later around 6.15AM Zue and Jimmy arrived; they took the KLIA2 shuttle bus from OneUtama.

By 6.45AM, we’re done with our breakfast; head to the surau, and then slowly walked to gate P2. The boarding slip said we should be boarding by 7.10AM, so, there should be ample time to walk there. But no. Gate P2 is actually hell far. Feels like walking through Middle Earth to Mount of Doom. The signboard says it should only took 10 minutes walking, but we ended up running like it was “The Amazing Race”. So we ran until gate P2 while people gave us that look. We made it there exactly when people were queuing up to board the plane. Now we know how those folks in The Amazing Race felt, well, in some ways.

The flight was smooth as expected, and we touched down at Kuala Namu International Airport (KNO) at 7.35AM, Indonesia Standard Time (GMT +7). After fixing our watch and smartphone’s time to 1 hour earlier than Malaysia, we checked out, then head to the Indomaret inside the airport to get some small changes by buying a IDR 3000 mineral water with IDR 100,000 notes.

Next, to our transportation to Lake Toba. I have made the reservation a month in advance, just to be safe, and they promised me a driver that will hold my name with the flight number. We slowly walk from the Indomaret to outside and be watchful with a guy holding a piece of paper with my name and flight number. Lo and behold: nope. None. No one fit that description, except some other guy holding some other people names. I called up the Bagus Bay Homestay (the place that I’ve booked for the night at Samosir Island), and they said if nobody turn up to pick us up, then just take any taxi directly from KNO to Parapat. Well, that’s just lovely, ain’t it?

The back-up plan was to take a cab to Amplas Terminal in Medan city center. From there take an express bus to Parapat, that might take up to 8 hours of bus ride. Chin up, and so we walked to catch a cab to Medan. All of a sudden, lo and behold (again), there’s a guy holding a teared-up card box with my name and flight number. I just grin. After saying hi to that guy, later on he handed me his phone with his boss on the other side welcoming me to Medan and Lake Toba too. Bla, bla, bla, the boss offered me 2 choices; Option 1: Medan to Lake Toba via the Tebingtinggi-Pematangsiantar route or Option 2: Medan to Lake Toba via the Berastagi-Kabanjahe route. We chose option 2 because of the scenic view plus we can stop by at Sipisopiso Waterfall.